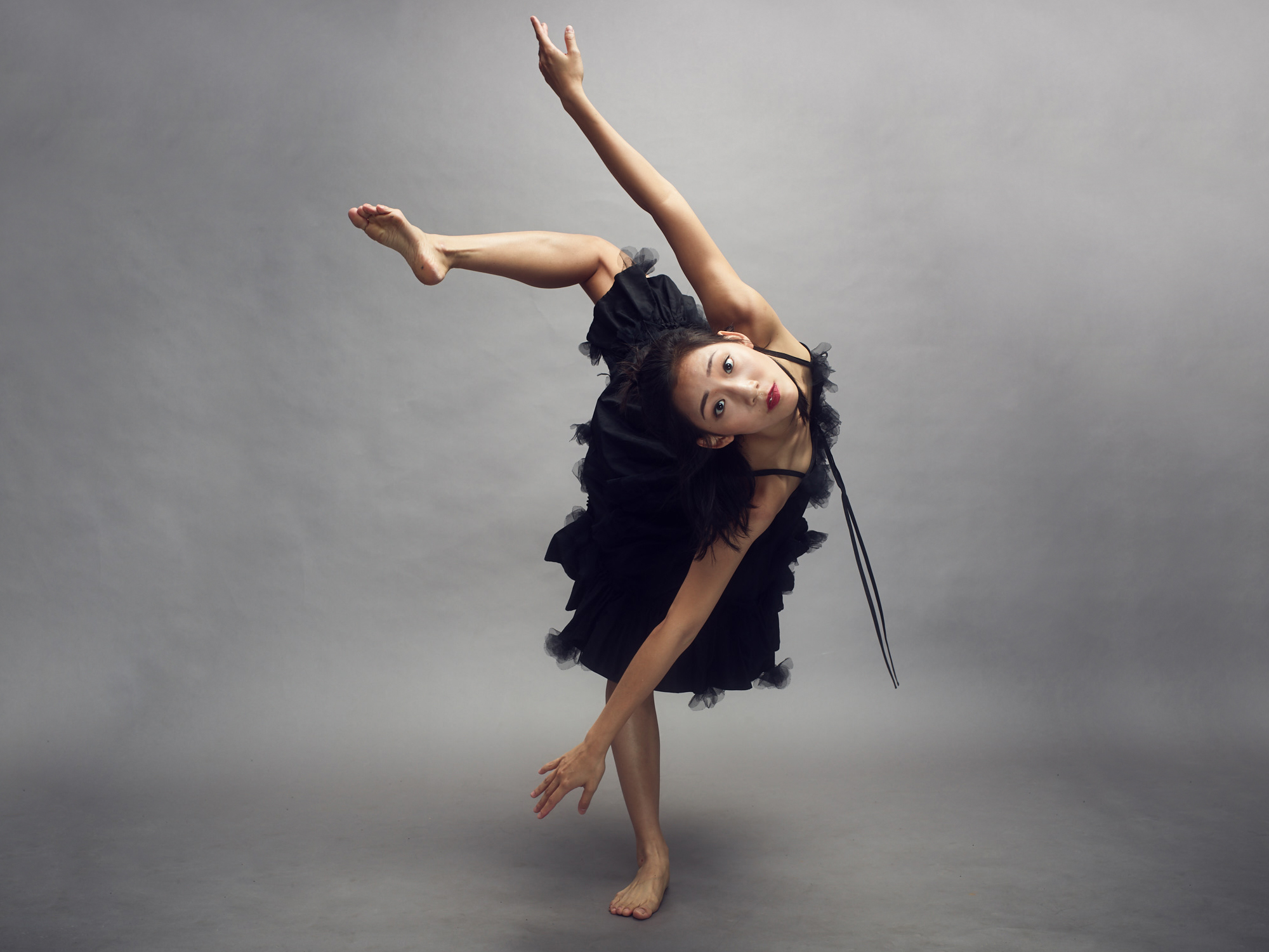 SEAD will give students a chance to experience SEAD in a one-week workshop that gives the participants a taste of what daily life is like in our program. MoveMentors Dance Intensive workshops offer daily morning classes in somatic practice, contemporary and ballet taught by SEAD faculty.

Our aim for the MoveMentors workshop series is to provide a format that will be inspiring, supportive and informative, giving students very practical skills and sound advice so that they can continue on their way in dance, surefooted and clear about what they need to focus on in order to progress as dancers. We also aim to offer an affordable workshop in a small group setting, where you can be in close communication with the teachers and other participants. MoveMentors Dance Intensive is also highly recommend as a preparation for those who want to apply for SEAD’s Auditions 2019/2020.

Isaac Spencer (Ballett)
Isaac Spencer is a dancer, teacher, and choreographer living in Dresden. He earned his Bachelor of Fine Arts from the Juilliard School in New York City. He was a member of Hubbard Street Dance Chicago, Cullberg Ballet in Stockholm and Göteborgs Operans Danskompani .He created and danced in works by Mats Ek, Johan Inger, Benoit Lachambre, Sidi Larbi Cherkaoui, Crystal Pite, William Forsythe, Richard Siegal, Ohad Naharin, Jiri Kylian and others, touring North and South America, Europe, and Asia. As a freelance artist he collaborates with Rachel Tess (SE/US), Sebastian Matthias (DE), Barbara Schmidt-Rohr (DE), Tino Sehgal (DE), Moritz Ostruschnjak (DE) and others. He has received merit-based funding from the Princess Grace Foundation USA and the Swedish Arts Council. Isaac is a member of the artistic panel of the Milvus Artistic Research Center in Sweden and the Villa Wigman e.V. in Dresden. He is a guest teacher of dance and improvisation in Scandinavia, Germany, Switzerland and the USA.

Konstandina Efthimiadou (Contemporary)
Konstandina Efthimiadou was born and raised in the North of Greece. She began with rhythmic gymnastics and trained for ten years before entering the National School of Dance in Athens. In her spare time Kostandina is following her strong passion for traditional Greek folk dance and since 2012 she is systematically practicing Tai Chi Chuan next to her teacher George Petrounias. From 2007 on, she has been part of Ultima Vez - Wim Vandekeybus company , Akram Khan Company, Roberto Olivan - Enclave Dance Company, Jozef Frucek & Linda Kapetanea - Rootlessroot, Christine Gouzelis & Paul Blackman Jukstapoz. She has worked under the artistic direction of Akram Khan as a rehearsal director to restage part of Vertical Road repertory for National Youth Dance Company in UK and the Hellenic Dance Company in Greece. Konstandina is invited to teach and give workshops in professional schools and festivals internationally. Since 2012 she has collaborated with Tainan University of Fine Arts (Taiwan), SEAD (Salzburg), Deltebre Dansa (Spain), Music Village (Greece), National School of Dance (Athens), NYDC (UK), El Danseu (Spain), Hong Kong Academy of Performing Arts (Hong Kong) etc. The past few years she is exploring her own choreographic view creating solo projects such as Henshin (2012), Dear Michael (2014), Lapses of light (2016). Konstandina on youtube with: Vertical Road, Akram Khan Company, KIRERU by RootlessRoot , Konstandina Efthimiadou

Marilena Dara (Pilates)
Marilena was born in Athens in 1990. While studying Management Science and Technology in Athens at the University Of Economics And Business she was accepted into the Greek National School Of Dance (K.S.O.T) and graduated with distinction in 2012. After graduating she participated in productions by Hellenic Dance Company both as a performer and rehearsal director, and had the chance to work on pieces by famous choreographers such us Akram Khan, Jasmin Vardimon, Jukstapoz, Martha Graham and Tono Lachky. From 2013 she has been a close collaborator of Christine Gouzelis & Paul Blackman (Jukstapoz Co.) assisting them in their productions “Vicious Cycle”, “Self Storage”, “Swoon”, “Folie” and “The Art of Dying”.

In 2012 she became a London based performer, collaborating with the award winning choreographer Jasmin Vardimon – firstly as a member of JV2 as well as understudying one of the leading roles in “Justitia” and later as the course leader of JV2 and JVIntensive since 2014. Since 2015 she has choreographed “I was, minus all” to be performed around the UK by JV2 Company and “Wear You Wounds” performed both by JV2 2017 around the UK as well as by 3rd year students of National School of Dance in Athens. Today, she has been an official faculty member in SEAD,the Cultural Manager of BODHI PROJECT and is working with Jasmin Vardimon in the role of Rehearsal Director for her productions “MEDUSA” and ‘Pinocchio’.

Marilena has been delivering workshops in several universities, studios and festivals around Europe such as National School of Dance in Athens, Institute of the Arts Barcelona, Trinity Laban Conservatoire of Music and Dance, The Place, HKAPA,Royal Holloway University, Bristol Institute of Performing Arts, International Dance Week – Budapest, Dance Cultural Centre and Greenwich Dance.

Dear MoveMentors participants,
based on a decree by the Fedeal Ministry to protect against the spread of corona virus, we would like to inform you that we are postponing this workshop to a later date. Replacement date will be announced! Stay healthy!
Your SEAD Team!

Alleyne Dance (Contemporary)
Dynamics, Rhythm & Texture -- This is a physical Contemporary Class, which will involve strong, complex and technical sequences in and out of the floor, focusing on performance/stamina and commitment throughout the session, improvisation will also be explored as part of self development. The significant factors for the workshop are to develop the dancers’ creative mind, drive from passion, determination, strength, musicality and most importantly an intention/honesty in whatever choice they make throughout the session. The style of Sadé Alleyne has been inspired and developed from working with the likes of Akram Khan (fusion of Kathak and Contemporary Dance), Retina Dance Company (Release and Contact Work), Gregory Maqoma (Afro-Fusion Dance) and Henri Oguike (Classical Contemporary Dance based on Forsythe and Cunningham techniques).

Sadé, together with her twin sister Kristina, presents Alleyne Dance, an internationally touring, innovative, modern, multi disciplined dance company based in London. Kristina and Sadé have worked with many companies across the years and trained in many genres of dance including traditional African dance, Hip Hop, Kathak, Latin and Circus Skills.

Yaghvali Falzari (Ballet)
Yaghvali received her ballet training in France with national and international teachers. She studied different schools of classical ballet (French School, Vaganova, Bournonville, American School). She also trained in contemporary and modern dance amongst other styles. She has worked in France, Italy and in London both as a freelance dancer and choreographer, and as a member of different companies. In the meantine, she certified as a teacher (Diploma in Dance teaching, BBO, UK ; Diplome d'Etat de Professeur de Dance, France) and taught in schools. In 2010 she moved to London and dedicated herself to teaching:

She taught both ballet and Floor Barre® in London, working with the Michael Clark  Company, the London Theatre School and as a private and freelance teacher. She taught as a guest teacher across Europe : Conservatoire du Valais (Switzerland), SEAD (Austria), Académie de Danse Lyon 7 (France),Skating School of Switzerland (Switzerland), Luciane Neves School of Dance (UK), and in Canada (Calgary, Alberta). She is also a BTEC qualified Sports and Remedial Massage Therapist (ISRM), a certified Pilates instructor (CTT Basi® Pilates) and has earned both Bachelor and Master degrees in Arts History and History at Université Lumière Lyon 2 (France)/Università della Tuscia (Italy), and a Dance Science MSc at Wolverhampton University (UK).

Dear MoveMentors participants,
based on a decree by the Fedeal Ministry to protect against the spread of corona virus, we would like to inform you that we are postponing this workshop to a later date. Replacement date will be announced! Stay healthy!
Your SEAD Team!

Janyce Michellod (Ballett)
Janyce is a dance maker researching on movement, improvisation and instant composition. Since 2005, she is developing a wide range of improvisation’s strategies, as well as an unique method to movement research. Her choreographic work has been presented Europe-wide and supported by numerous institutions and organizations in Switzerland and abroad. In 2010 she is founding Lastalaïca Productions, a company focusing on a multidisciplinary body of work.

Janyce is teaching her method Lastalaïca improvisation’s strategies Europe-wide in various centers for professional dancers, companies and academies. Janyce has worked as choreographic assistant, rehearsal director and company teacher for Michael Klien and Colette Sadler and has performed with the Zürcher Ballet, the National Ballet of Cuba, Daghdha Dance Co. and Lastalaïca Productions. At last but not least, she is an herbalist currently studying traditional european medicin to become a Doctor in natural medicine.

Christine Gouzelis (Contemporary)
Christine is one of the directing members of Jukstapoz Company.
Having worked for the Hellenic Dance Company in Athens, she has performed for choreographers such as Wim Vandekybus, Anton Lachky, Rootlessroot, Athina Vahla, Pascal Rioult and others.

Christine has trained with and danced in various creations internationally alongside the renowned David Zambrano since 2004. She was also a member of the Jasmin Vardimon Company in London, where later she was appointed rehearsal director for the company. She has also been a rehearsal director for Anton Lachky and Athina Vahla's productions in Greece. Recently Christine was the Artist in Residence at the Hong Kong Academy of Performing Arts. Being nominated by the Hong Kong Dance Alliance for the award of 'Best Choreography' and 'Best Ensemble' for the work - Fragile Matter. Christine is also one of the senior lectures at the National Greek Academy of Dance and leads workshops and seminars with esteemed institutions across Europe, Asia and Australia.